It seems where you are born is an important factor for the perks you receive in life. Whether that be natural born citizenship in your country, or on a transit in Paris to be given free rides until you turn 25! Which happened to one lucky boy who first saw the world in some train in France. 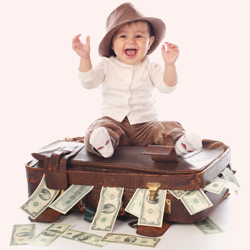 Apparently this happens a lot. Another baby that was born on a Jet Airways flight travelling from Dammam in Saudi Arabia to Kochi was awarded free flight for life.

So the lesson here is, if you are having a baby, plan to have them somewhere where you want free stuff for life. I’d definitely choose an amusement park – free roller coaster rides for life!

(Independent.co.uk) — A baby born on a Paris train on 18 June was awarded free rail travel on the network until he turns 25.

The mother went into labour at around 11am on the busy RER A line that runs from east to west Paris.

After stopping at the Auber station in central Paris, the train was evacuated and further trains were halted in both directions on an especially busy section of the commuter line for 45 minutes as a consequence of the new arrival.

Approximately 15 people assisted with the birth, including emergency workers, police and railway staff.

“The RATP congratulates the mum and intends to offer the child free travel on its network until he is 25 years old,” a spokesperson told AFP. — Read More